6th edition and back to the Blog

So 6th edition is here and things have changed a lot.

I was in a bit of initial depression about the total nerf bat leveled on my webway dark eldar.... still stings.  But out of the ashes of despair I have risen up on the wings of the immortal Vect, and the rise of haywire.

Got my first games in with the edition and I have to say that with the amount of haywire attacks that dark eldar can get they can really clean up vehicles.

In 2 turns my 3 talos killed a landraider with ease, something that would only have been a pipedream in the last edition.  And with many units capable of carrying the grenades no vehicles are safe.  Not only will dark eldar grenade units rip vehicles apart on the charge but each can now toss a grenade at times too.  And so far I have been unable to find anything that keeps me from tossing said grenades at flyers as well... obviously needing 6's to hit.

So thats my initial thought to start.  Ill start posting up what Im toying around with in terms of lists... and they all involve Vect right now, and hopefully some battle reports soon, after I finish off 5th edition with a bang down at the ATC this weekend.
Posted by Sean at 6:30 PM No comments:

The last game was against a buddy Jeff and his test list for the Colonial in March.
Draigo
Karsimov
10 Paladins
10 Paladins
Read more »
Posted by Sean at 7:00 PM No comments:

Game 2 this past weekend was against my friend Brandon and his Space Wolves.
Read more »
Posted by Sean at 8:46 PM 2 comments:

Went to an 1850pt Tournament this past weekend. Was looking to test out my ever changing Kabal for Adepticon. Here is what I went with after the drop:
Read more »
Posted by Sean at 5:17 PM 1 comment:

Local Event this past weekend: 1250pts

So I drove down to Stratford Ct, to the Gaming Etc for their 1250pt tournament this past saturday.
I brought this list:
Archon - huskblade, combat drugs, clone field, webway portal - 160
5 Wyches - haywire grenades - 60
5 Wyches - haywire grenades - 60
5 Wyches - haywire grenades - 60
7 Harlequins - shadowseer, death jester, 2 fusion pistols, 4 kisses - 202
5 Beast Masters - 8 Razorwing flocks, 5 Kymerra - 240
3 Beast Masters - 3 clawed fiends - 156
9 Reaver Jetbikes - 2 heat lances, 1 blaster, 3 cluster caltrops, leader with venom blade - 312
My goal for the event was to test out the Deathjester, and the clawed fiend unit as well as the large jetbike squad.
I played 3 games, against Chaos, Grey Knights and Necrons.
In the game against Chaos I flew over a demon prince with the bikes and did 2 wounds... and then they lost combat over several turns to 5 marines.... epic fail. The Clawed fiends charged that wounded demon prince and finished him off over 2 turns. THen they multicharged a bit too much and failed epically and fled, so mixed review.
I still managed to win that game with 6 kill points to 4 largely based on the power of the larger beast pack that ate through a khorne beserker squad, a Demon Prince and an Obliterator. The Harlequins also did fairly well both denying kill points and contributing a bit of firepower.
In the Grey Knight game the Bikes shot and killed a Dreadnought and then did well moving about and immobilizing another tank. The Clawed fiends were largely useless in this game. The Harlequins were again nice, sitting midfield and applying pressure. And then when his landraider moved too close they wrecked it with melta pistols and charged a small paladin squad and did enough wounds to win combat slightly.
In Game 3 against the Necrons the Bikes again shot down a vehicle early. The Clawed fiends werent even able to get on the field before the game was over.
So overall in the testing the Clawed fiends will get dropped easily. The bikes were usually effective best as a 2 melta lance unit. While the extra bodies are useful for taking hits I think Ill try them simply as a small 6 man dual lance unit, as my friend Bob usually does.
Posted by Sean at 9:41 AM 1 comment:

The next direction for the Kabal

Whats that mess on the table? 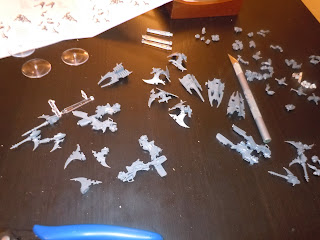 Game 5 I was playing Ben Mohile. Mission was to get 2 scoring units you had to choose before hand into your opponents deployment zone.
Ben's list can be found online Im sure. it had 2 command barges, 3 min units of scarabs, 3 units of spyders, and 4 units of immortals.
Ben spawned scarabs turn 1, and used one unit of 6 to get a first turn charge on my archon hoping to delay my ability to deploy the portal. Well suffice it to say that a +1 str archon with a huskblade laughs off that few scarabs.
Turn 1 I moved up with the bonus of a 5" consolidate after that aforementioned combat... and I placed the portal.... oh wait thats what I should have done. 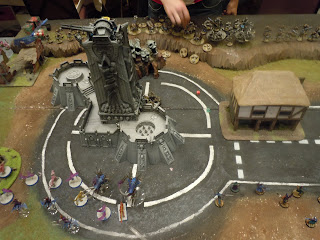 I chose to charge some spyders instead for sport. 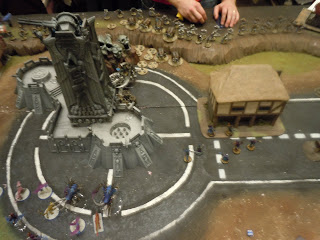 Basically the rest of the game came to just us playing for fun. I still pressed him as best I could and had some slim chances of drawing late but they dwindled as they should have. 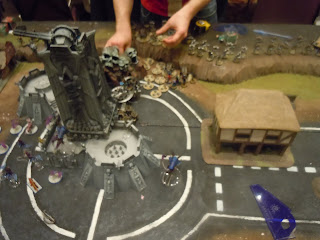 Unmolested Ben did manage to spawn enough scarabs to exauhst the supply he had brought with him. And then in a late combat I broke his previous combat resolution record. I won a combat against scarabs by 38.
However I felt badly that I had given such a good player a lame duck game. To this day I can not say why I didnt put the portal out. As you can see in every other battle report involving this army turn 1 is pretty much a no thought process of moving up and placing that little 3" template, there is really no other choice turn 1 other than losing.
Posted by Sean at 3:30 PM 1 comment: