I know I promised pictures in my next report. But I was 3 minutes from the game store the other night... which is 40 minutes from home before I realized I hadnt brought the camera. Oh well these powerpoint slides seem to get the job done reasonably well. Plus Brian needs to get more of his army painted before it will look good in pictures, lol.

So Brian is frustrated with the state of the Tyranid codex and so we have been looking for ways to create a competitive list, that he also can enjoy playing with strategy and skill. Right now that involves 1750pts as we are preparing for the Conflict Gt in January.
After theory and discussion we are starting his testing with this list:
90 – Tyranid Prime, 2x Boneswords
90 – Tyranid Prime, 2x Boneswords
100 – 2x Hive Guard
100 – 2x Hive Guard
110 – 2x Venomthropes
195 – Tervigon, Catalyst, Adrenal Glands, Toxin Sacs, Cluster Spines
110 – 22x Termagants
110 – 22x Termagants
98 – 7x Genestealers
245 – 7x Raveners
250 – Trygon Prime, Adrenal Glands
250 – Trygon Prime, Adrenal Glands
1748
This past monday he asked me for a practice game and I was happy to oblige. He also asked that instead of my regular tournament shenanigans with pods and dreadnoughts that I bring something a little more standard to start. So my list looked something like this:
Vulkan - 190
Librarian - epistolary, null zone, avenger - 150
7 Assault terminators - 5 hammers, 2 claws - 280
Tactical Squad - flamer, MM, power weapon, rhino - 220
Tactical Squad - flamer, MM, power fist, combiflamer, rhino - 240
Dreadnought - 2 TL Auto cannons - 125
Dreadnought - 2 TL Auto cannons - 125
Speeder - MM/HF - 70
Speeder - MM/HF - 70
Land Raider Crusader - MM, EA - 275
We started with a 5 objective mission with pitched battle deployment. Brian won the roll to go first and took first turn. he deployed the bulk of his force in a phalanx in the upper right, while the trygons and the ravenors formed a wing to the left. 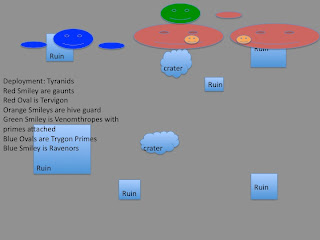 I deployed my landraider packing Vulkan and the terminators across from his trygons. I combat squaded my marines, leaving the half in reserve while the rest jumped in their rhinos. My Librarian joined the marines on the bottom left. My Dreadnoughts set up in a central position to get the best sight lines. 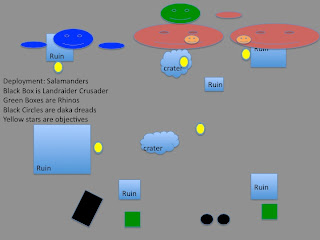 On turn 1 the tyranids simply moved up and ran as nothing was in range. 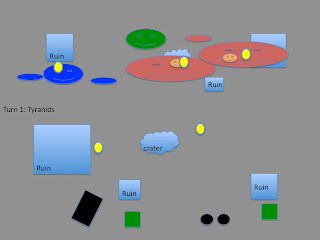 On my turn 1 I moved the Landraider up 10-12 inches to threaten the midfield. I also hoped that having to hit me on 6's in combat would keep me safe from the trygons. I also advanced the rhino's popping smoke. I fired the dreadnoughts on the nearer trygon taking 2 wounds off it. 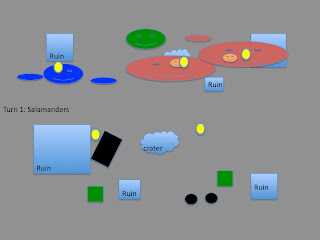 On turn 2 the horde moved forward again. The tervigon popped out a unit of 18 termagaunts losing its ability to make more. The hiveguard immobilized my rhino on the right flank. In close combat the trygon charged my landraider, with rerolls to hit it wrecked the battle tank, spilling my terminators out the doors. 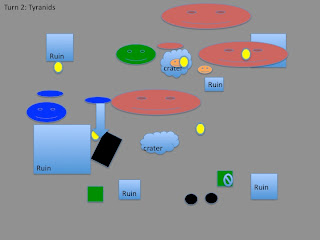 On my turn 2 got one of my speeders in from reserve. Dropped it in midfield to be a nuissance and burn some gaunts. My dreads fired on the prime/ venom unit dropping one of the venomthropes. I tried to charge my rhino through terrain in the bottom left to shift away from the fast moving ravenors, however I rolled a 1 and immobilized myself right there.
In assault Vulkan and the terminators charged into the approaching gaunts and the Trygon simultaneously. They all passed their dangerous terrain checks for charging the gaunts(caused by the venomthrope unit) Did 2 wounds to the trygon, and a bunch to the gaunts. But lost 4 terminators. Won combat so the gaunts lost more numbers to fearless wounds. 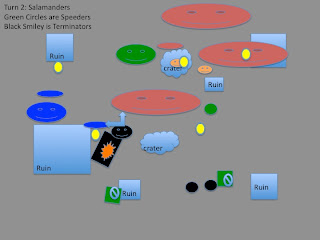 Brian got his genestealers in on turn 3. He moved them on from the flank on the top left to hide and claim the objective there. His ravenors moved through the building to charge at my rhino, destroying it. His core moved forward firing on my speeder, taking its guns and shaking it. One of his other starting gaunt squads moved into the combat with vulkan hoping that their poison and furious charge buffs from the tervigon would let them turn the tide of that battle.
All the terminators were finished though they in turn finished the trygon as well, which had been lowered to initiative 1 by their thunder hammers. And vulkan stood strong taking only a single wound from the gaunts. So once again he on combat and the gaunts took a few extra saves and circled in tighter around him. 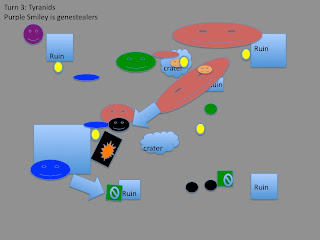 My other speeder came in this turn. It was about this time as well that I figured Brian had the game in the bag... but never one to quit Im always happy to fight on to the last man.
My new speeder scattered off into the back but still got to flame a few gaunts. My weaponless speeder I flew forward to block the advance of his primes and tervigon. This time my dreads knocked out a unit of hiveguard that hadnt been in cover. My tactical marines also exited their boxes bent on trying to take back a few of the objectives.
The Librarian and his unit fired upon the ravenors between avenger and 2 twin linked flamers they burned down 4 of the bugs. Then they charged in hoping their powerfist and the librarian's force weapon would cleanse them further. However the high initiative attacks by the ravenor downed the fist, and the Librarian wiffed on his attacks. Lost combat by 2 but managed to stay stuck in.
Vulkan continued to churn the small bugs in the center, doing 2 wounds and taking non in return causing a few more to drop due to fearless. 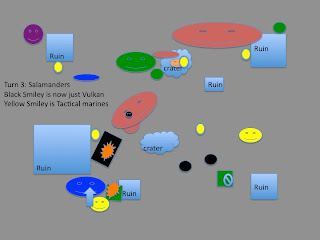 The frustrated big bugs in the center turned all their ire against the speeder. Unable to reach vulkan because of the swarms around him they blew away the small vehicle. The hiveguard fired upon my other speeder taking off its heavy flamer.
This combat round the Librarian struck through the ravenors, and though he took a wound himself his force weapon lit up taking a whole bug with it. That helped the marines turn the combat and when the ravenors fled they cut them down. 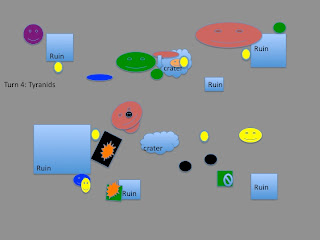 My other marines showed up on turn 4 and began to march towards the central objective. I separated the Librarian from his unit hoping to distract the trygon. In reality I was hoping he would charge me and Id get lucky with the force weapon, what I should have done was charge him into the trygon and hope for my luck that way. But Im used to waiting with my dreadnoughts just to buy time.
I moved my shooty dreads forward some more to block access to the objective and shot down the last of the hiveguard. My speeder moved flat out along the board edge to gain position for turn 5.
Once again vulkan killed a gaunt or so, though this time he took a wound leaving combat tied. 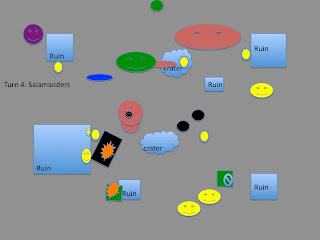 On the tyranids 5th turn he moved his genestealers to claim the objective. His Trygon easily shot down my Librarian while contesting the objective there. His gaunt team that was still mobile clustered near the top objective while trying to shoot down my speeder to no effect. Finally his tervigon charged into one of my dreadnoughts hoping to destroy it and consolidate forward onto the objective. The dreadnought held firm.
Vulkan once again won combat. Only 2 gaunts remained. 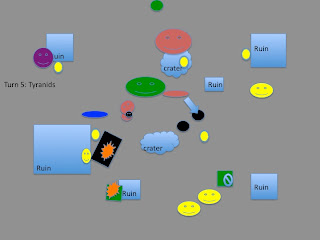 On my turn 5 with the clock running down I jumped my speeder over to contest the genestealers objective. My marines in the top right moved into range to claim that one, and so did my troops advancing towards the middle point. I also charged the other dreadnought into the tervigon to ensure that it would have to kill both with its limited combat ability.
The dreadnoughts held firm, but vulkan killed only one gaunt so still was stuck in combat after the other passed its fearless wound save. 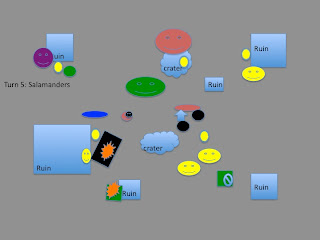 We called the game due to time at that point with me leading however slimly to a 2 objectives to one victory. 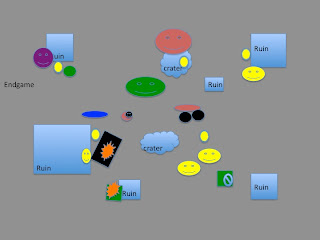 If the game had gone on to another turn I would have lost that slim advantage quite quickly. Overall Brian was pleased with the dynamics of his new list. We just talked over several points that would have made his application much better.
On the marine list... it shows me more and more why I dislike terminators and landraiders. I miss all my pods screaming out of the sky as well. ITs fun to play these different lists then what I consider to fit my style. It keeps the game fresh. Also when its helping a friend plan for a tournament I dont mind playing things I would never field but seem to fit in the vast amount of tournaments in the area.
As we get closer to the date he'll eventually have to play whatever drop pod list eventually I can trim down to 1750pts.
Anyone else thinking about going to the http://www.theconflictgt.com/ we'll hopefully see you there.
Posted by Sean at 11:54 AM